Whilst most crypto-currencies have currently lost most of their modest gains made over the Summer, the leading alt-coins have been feeling the strain more so than the crypto-universe average, especially during the month of September.

Bitcoin has managed to hinge onto some kind of stability at around the $6,500 mark, but leading alts have generally been unable to demonstrate any kind of resistance to the general market downtrend. However, it seems that Ripple may now be demonstrating signs as an exception.

According to a number of technical analyses performed on Ripple, the general year-to-date downward trend may just have been broken with indications of a reversal in sight. The first green candle in the graph below – sourced from Trading View – shows that yesterday’s price closed just above resistance, with a second consecutive green candle indicating signs of bullish momentum rearing its head. 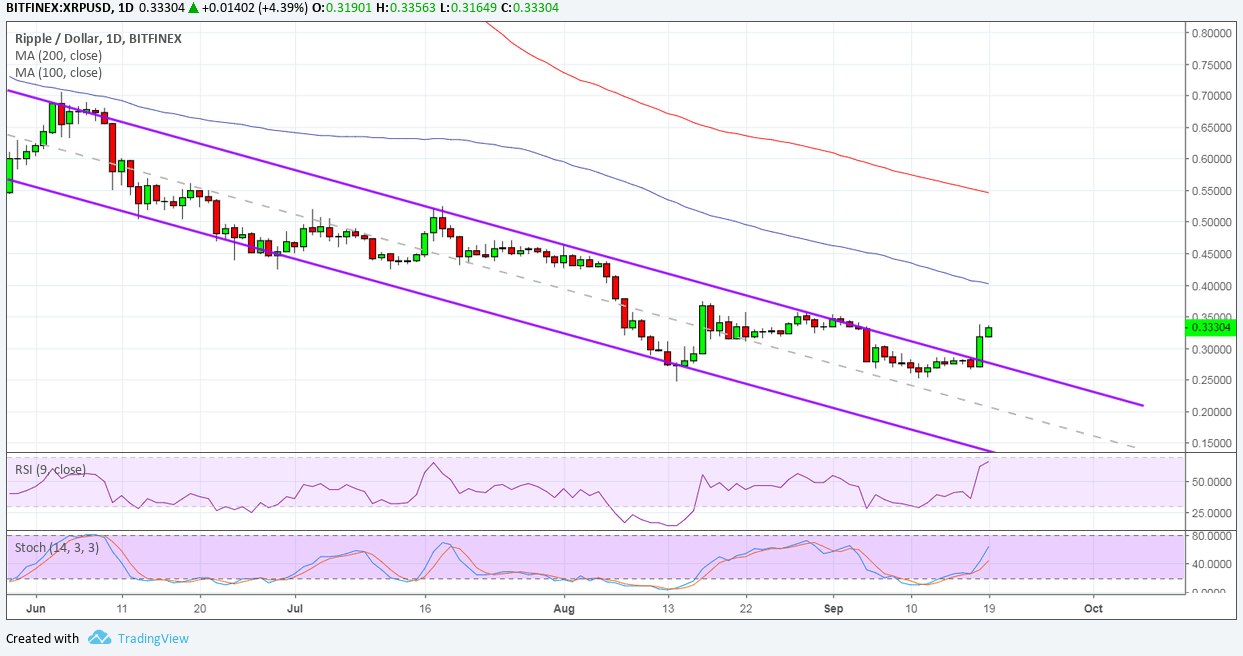 Ripple is currently trading at $0.33033, an increase of more than 20.37% over 24 hours according to Coinmarketcap at the time of writing. The price subsequently reached $0.33700 at the beginning of yesterday’s market trading, with XRP’s market capitalisation rising to over $13 billion.

Beyond the technical indicators themselves, there may be a real-world explanation to these observations, specifically CNBC’s report published Monday on new Ripple-based payment platform, xRapid, which appears due for release in October, and representing a new strategic angle for XRP’s wider adoption.

xRpaid – a cross-border payment system using XRP as its intermediary currency – has already run through its pilot program in the first quarter of 2018, which tested a payment channel between the United States and Mexico, resulting in savings of between 40 and 70% on transaction costs.

The technology may, therefore, attract interest amongst banks and other companies engaged in high volume cross-border transactions, particularly as it offers substantial improvements in transaction processing turn-around times – just over two minutes in comparison to current turn-around times of 2-3 days.

However, whilst perhaps good news for XRP hodlers, XRP has itself a long way to go before it recovers to its all time high of $3.84 from January 4th.

With an academic background in Business and Marketing, and ten years' professional experience in digital and affiliate marketing, Marcus is an avid cryptocurrency and Blockchain enthusiast. After eight years in the sunny climes of Thailand, he is preparing a move home where he is now planning to take up his Masters in Finance.

In order to view the contents on this site, we will require your consent to the use of cookies. More details on our commitment to privacy can be found here.